Journeying to Light– the Essential Nature of the Mosaic Medium

Elaine M Goodwin recently celebrated her 40-year career in art with a Retrospective Exhibition at the Royal Albert Memorial Museum & Art Gallery in Exeter, England. (April 10 to June 23, 2019). Here, she recollects the experience that explains her fascination with light. 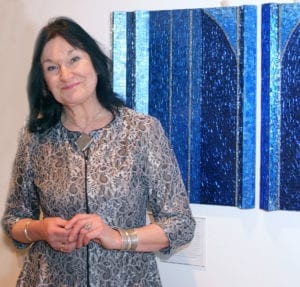 My Theme is Light

The essential nature of the mosaic medium was miraculously revealed to me by an encounter with ancient Byzantine mosaics. From that moment onwards, I found that mosaic was truly my medium—one through which I could totally express myself.

When I uncovered this secret, it radically changed the way in which I worked within my already-chosen medium of mosaic. You might say it was a revelation which gave me what I searched for—a personal voice. I had already found new delight in encountering specialist mosaic glass. In particular, I was enticed by the colorful handmade mosaic material called smalti, which was uniquely manufactured in Venice. I also found gold! Mosaic gold was to be a wondrous addition to my palette, but at this time I used it, just as the Romans did, for highlighting or creating points of focus within a design.

Then, in the mid 1990s, I found myself in the city of Ravenna in Italy, looking at the 6th-century mosaics of the basilica of San Vitale, and was particularly drawn to two secular panels—one of the Emperor Justinian and the other of his consort, Empress Theodora. These were glowing panels, rich in figurative and textural detail using mainly smalti, but with a little marble for hand and face detailing, and mother of pearl for its luster in decorative areas—and all positioned on a simmering golden ground. As I looked, musing upon such wondrous artistry, a glowing beam of sunlight fell across the mosaic surface, immediately dissolving the portrait images into a myriad of light particles. All the figures had, in effect, dematerialized into light.

I marveled at this transforming aspect, one I had never experienced before when looking at classical mosaics. I knew with certainty that it was the light bouncing off the imagery that had been transubstantiated and had subsequently opened this new way into a greater sense of understanding. Through light, therefore, I knew that a more profound sense of knowing could be experienced.

Byzantine maestros were able to cut and fix the mosaics to vertical walls, cupolas, and vaults in great schemes covering the interiors of the new buildings of early Christianity. The source of their understanding in relaying their sacred message lay in exploiting light by physically manipulating the special characteristics of gold and smalti.

On the internal vertical and curved surfaces of the new basilicas, the tesserae could be applied at angles into the mortar to attract and repel light. This tilting of the tesserae was used with great skill and understanding to give the ultimate effect to the viewers. Mosaics, at this time, did not portray a light source within the imagery but relied, instead, on the moving light from both candles and natural daylight. By utilizing these different sources of light, mosaic artists could manipulate light so much that it could be made to transcend any imagery completely, through brilliant or even blinding light. This is what had happened to me.

Experiencing mosaic in this way—through light—especially in a sacred setting, the viewer is enveloped in a transcendental mystery. I believe the same extraordinary and wonderful effect can be realized in a secular or contemporary setting such as in an art gallery or even a personal environment. Gold was always considered a worthy vehicle to transport Divine ideas in art. This extra element of conveying Light, which the mosaic medium proffered, could give even greater Divine expression or spiritual awareness. I knew that this way of perceiving mosaic could be utilized by me in my personal work, and, at last, give me a conduit through which I could truly explore my everyday experience. My meditations on life, love, and death could now be translated into mosaic using light as an integral part of the exploration. 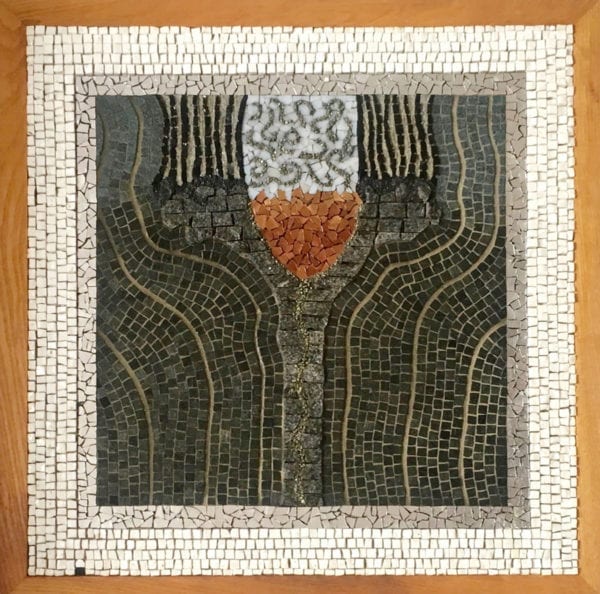 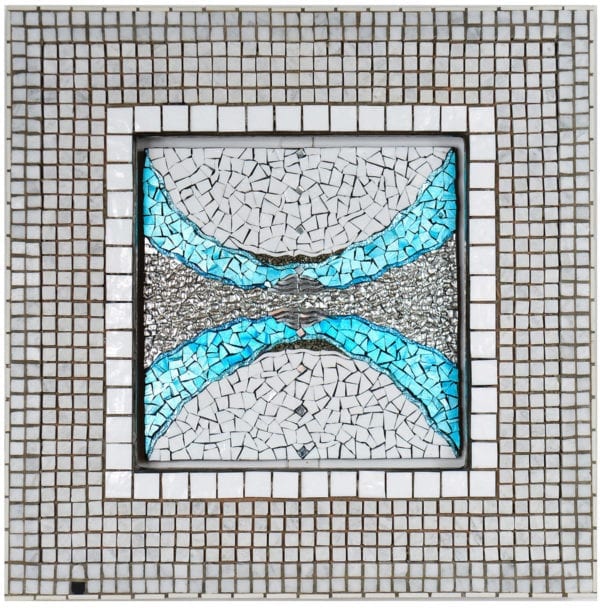 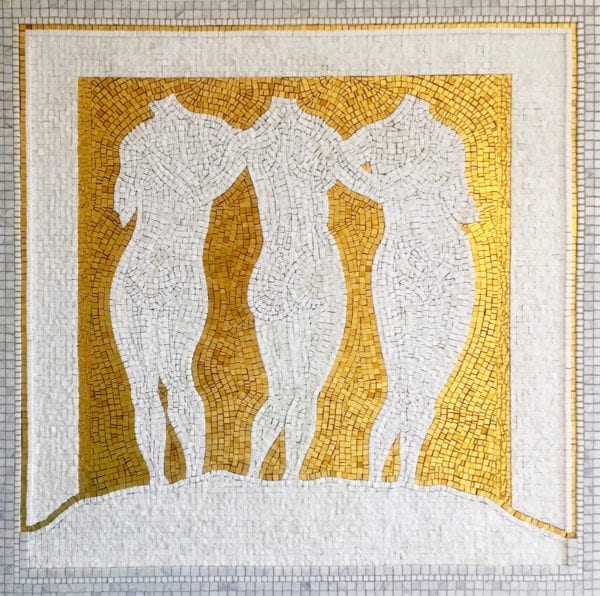 The Three Graces 2005 Photo by EMG

The Kiss 2011 photo by M.Tomkinson 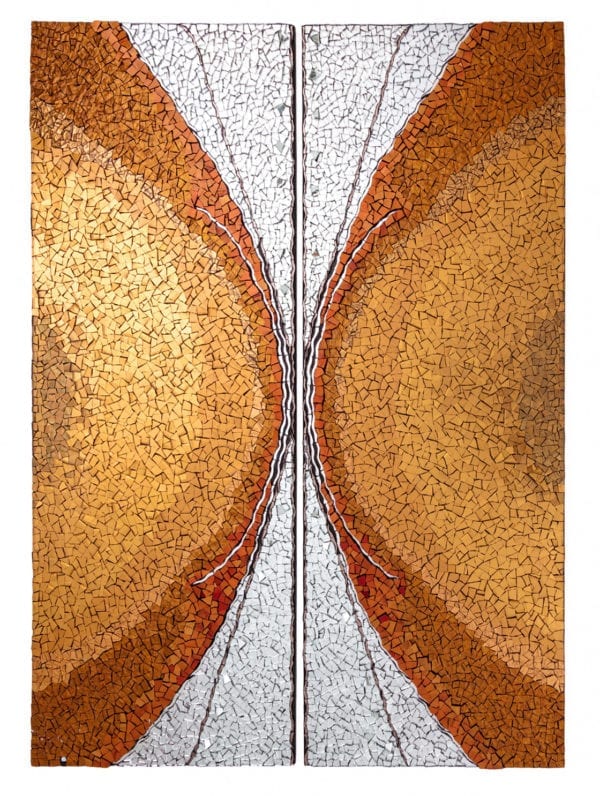 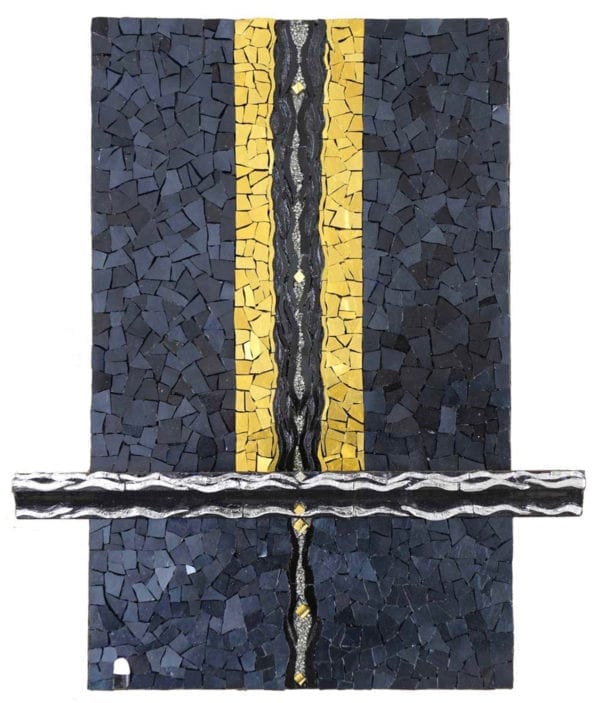 Materials In Elaine’s early work—mostly prior to 1995—materials such as smalti, vitreous, and ceramic tesserae predominate. As her “journey to light” progressed, the range of tesserae began to include: Venetian gold leaf glass and glass smalti, Ravenna glass, Carrara marble, mirrored glass, granite, Venetian silver and gold, and “fool’s gold” (iron pyrite).