The People’s History with Carrie Reichardt 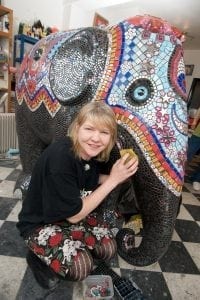 The People’s History with Carrie Reichardt

In her talk, Carrie will discuss the importance of narrative-based art in highlighting individual and collective stories that have otherwise been whitewashed from history, and the powerful role that heritage-based art and objects can play in establishing and maintaining civic agency and identity. She will talk about her ‘Tree of Life’ mosaic mural for South Acton Estate and her projects in Aberdeen, Scotland for last years Nuart Street Art Festival.

The talk will include a powerpoint presentation and hopes to inspire and encourage others to use text and visuals that tell the peoples history.

Carrie Reichardt’s award-winning public work reflects her sustained engagement with people, place, and politics, with a focus on marginalized groups – and in particular, women and their hidden histories. Reichardt draws on local archival sources to create works that resonate with the communities they are set within and describes her work as a form of “ceramic tapestry” – weaving local people and their histories together.

Reichardt has been involved in community and public art projects for two decades, designing and consulting on large-scale mosaic murals in various local communities. She has produced a community mosaic in Miravalle, one of the most deprived districts on the fringes of Mexico City as well as projects in Argentina and Chile. In 2018, Reichardt finally completed the transformation of her west London home into a giant mosaic mural – a process that took twenty years and tens of thousands of tiles to complete.

In 2013, Reichardt won the prestigious Winston Churchill Travelling Fellowship to research ‘How to advance community mosaics in the UK’.

Reichardt trained at Kingston University and achieved a First Class degree in Fine Art from Leeds Metropolitan. She was Artist in Residence at Camberwell Art College in 2009, The Clay Studio, Philadelphia, USA 2014 and is currently artist in residence with The Shakespeare Birthplace Trust.
Reichardt is frequently called to speak on the use of craft and art as protest and has presented at Museum of Liverpool, Victoria and Albert Museum, ICA, Powerhouse Museum in Sydney.  CarrieReichardt.com