Jacqueline Iskander writes:  My collection is a mix of gifted, purchased/won at auctions, and commissioned mosaics. Most of them are in what I call my studio wing, because they are not large and I want to be able to see them as much as possible during the day. Four larger mosaics are in our family room. I like other artists’ work for many reasons. Kath Jones’ work is lusciously, vividly, wildly chunky. Brooks Tower tells a story in gorgeous, sleek opus sectile. Kate Kerrigan’s piece is clean and minimal. Lynne Chinn’s is complex and fine. Sometimes, it may just be that the style is so completely different than mine, as in Jeff Alexander’s. Whatever it is, I’m grateful and honored to have each piece. 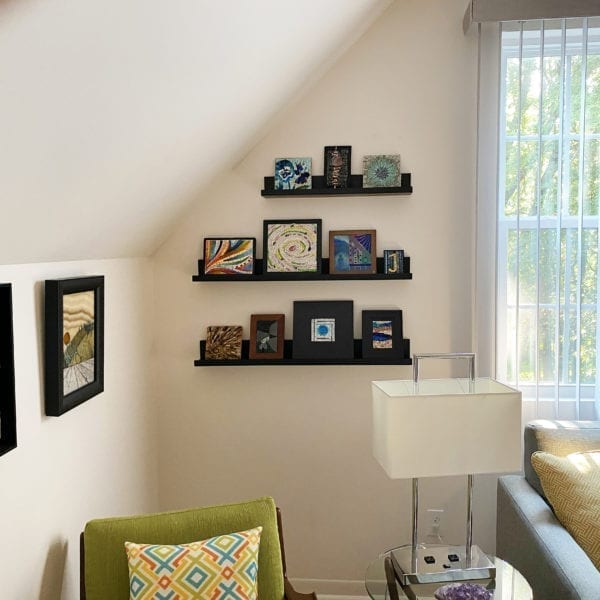 Continuing in to my studio area, this is in a corner of the living area leading into my studio. From the top, left to right: A pansy by Jeannot Leenen, “Copper Study” by Kelley Knickerbocker; a sea urchin by Rachel Streeter, a demonstration mosaic by Giulio Menossi; “Eye of the Storm” by Tracy Hodson; “Genesis” by Cecilia Kremer; a J mosaic by Kathy Thaden; “Dragon’s Eye” by A. J. Cameron??;  “Bloom Where You Are #5” by Pam Givens; a decorative mosaic by Heidi Easton-Pichler; an untitled piece by Wendy Gray Raven; “Dragon’s Eye” and “Genesis” were won from the Doctors Without Borders online auction. Jeannot’s, Kathy’s, Pam’s, and Heidi’s were acquired through Facebook Make Five exchanges. Menossi’s was acquired through his first class on the Venetian Double-indirect Technique. I purchased Wendy’s at a SAMA Salon, Kelley’s and Tracy’s directly from them, and Rachel’s from the Silver Lining virtual exhibition by the Bandon Library Art Gallery in Bandon, OR. 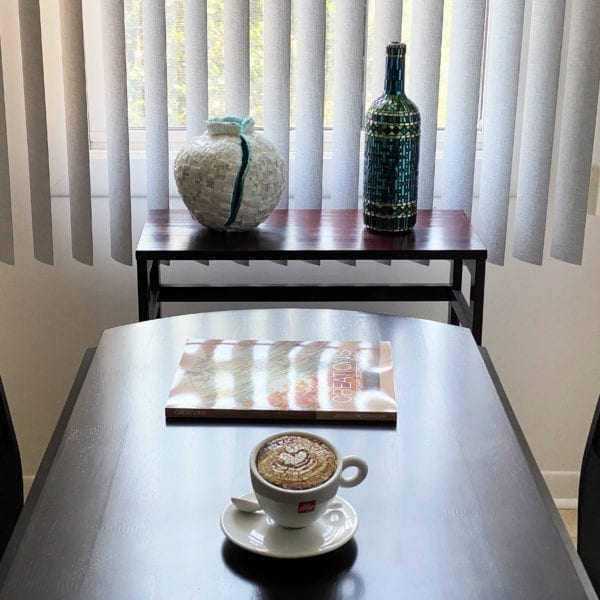 In a small dormer window space at the entry to my studio wing is one of Lynne Chinn’s “Outcropping” sculptures on the left, in front of the window, next to one of my bottles. On the table is Julie Richey’s Italian caffè mosaic. I purchased both of them during one of Lynne’s classes at Julie’s studio. I treated myself for my upcoming birthday. 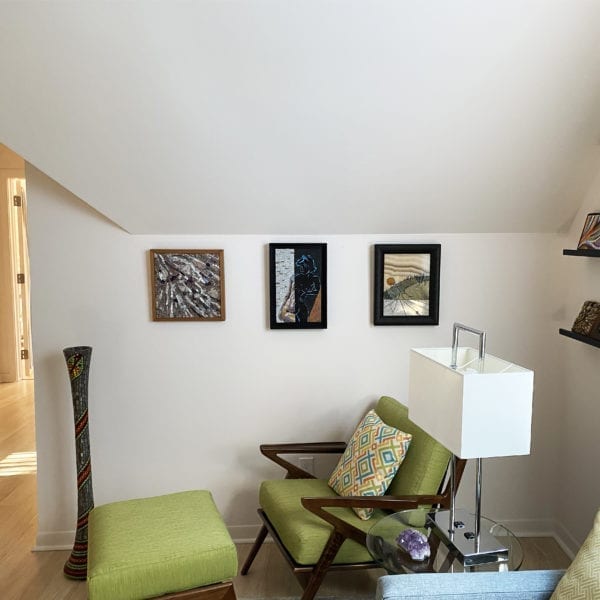 On the adjacent wall is “Red Tide” by Sophie Drouin, an untitled work by Irit Levy, and “I Gave You Latham” by Brooks Tower. Sophie’s and Irit’s were bought at a SAMA Salon, and I bought Brooks’ from his show in Oklahoma City. 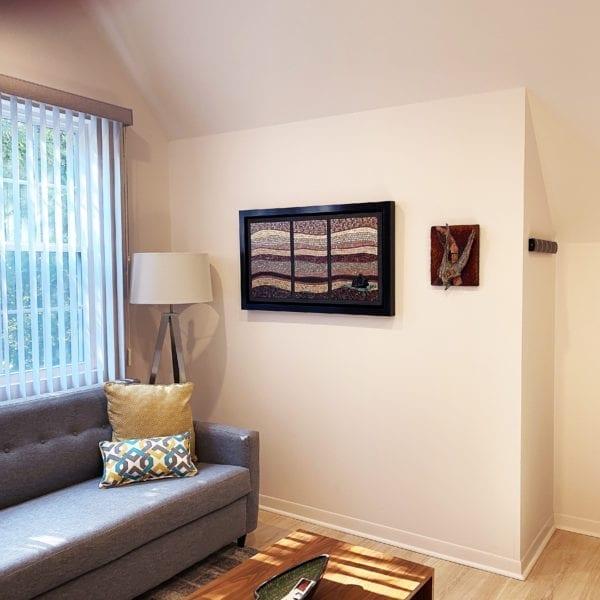 On the opposite wall, on the right, is “Spirit Branch” by Tulsa artist Cindy Swanson, which I purchased from the annual sidewalk fair at the beautiful Utica Square here in Tulsa. It is hanging next to my own “Loner.” 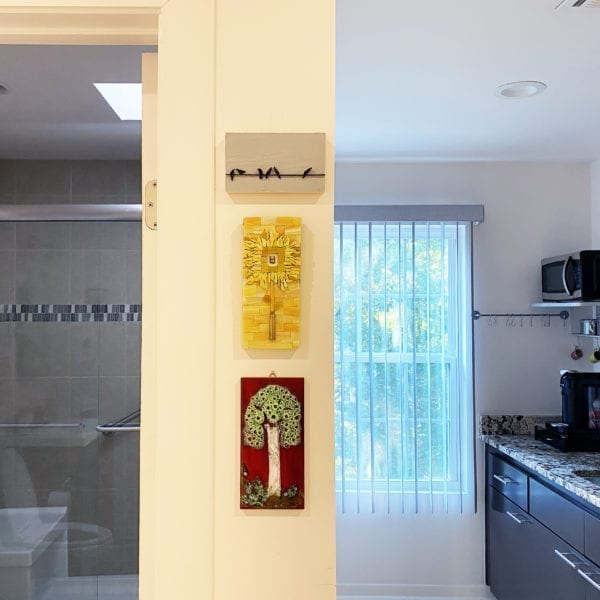 As we walk toward my actual studio, on this narrow wall between the bathroom and kitchen, is my most recent acquisition, on the top, of Kate Kerrigan’s “Birds On A Wire.” I bought this directly from her after I saw it on Facebook. Beneath is an untitled piece by Ilona Fried, which I purchased as part of a fundraiser, maybe about gun violence? And on the bottom is a hand-painted tile I picked up in Venice. 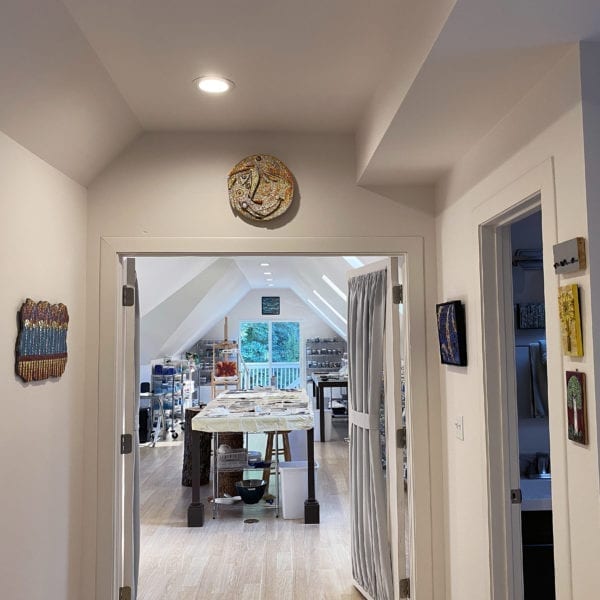 Heading into my studio, above I have the untitled moon-themed mosaic by Giulio Menossi that he gave to me. It is kind of flanked on the right wall by my “Remembering Istanbul” and on the left by my “Lotus Panel.” 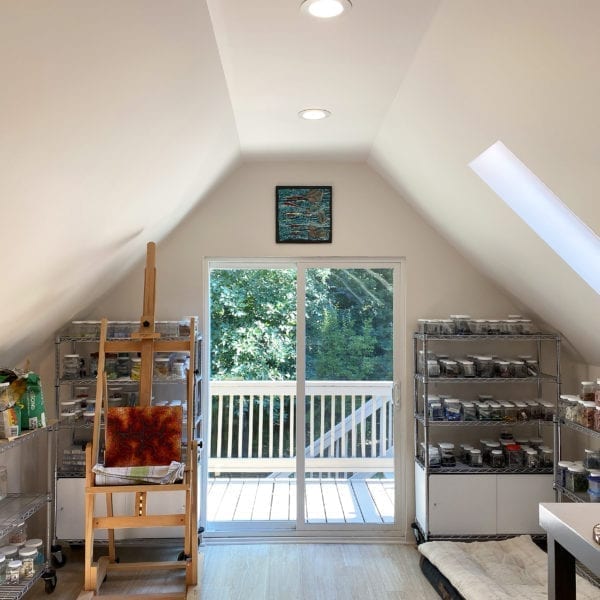 Now, in my studio, on the wall above my sliding door, I have another recent acquisition by Vera Melnyk, titled “Sonoran Trail.” I also purchased this from the Silver Lining virtual exhibition by the Bandon Library Art Gallery in Bandon, OR. On the easel is my recently finished “When You Left Us.” 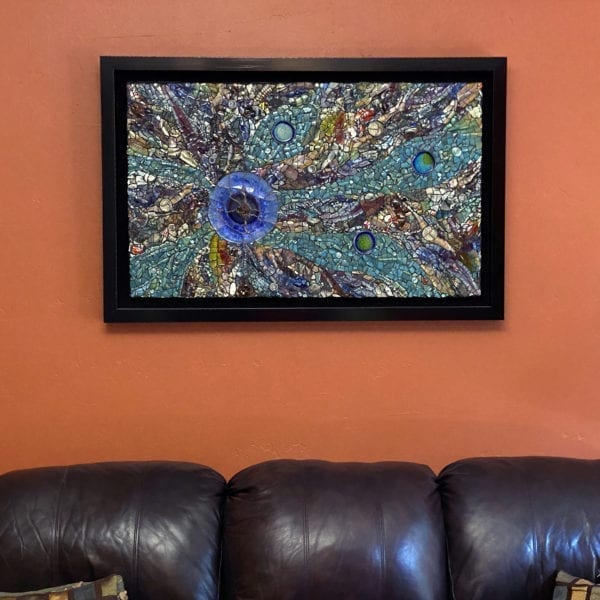 In our family room hangs “Nexus,” a piece I commissioned from Kath Jones. It gets the whole wall. 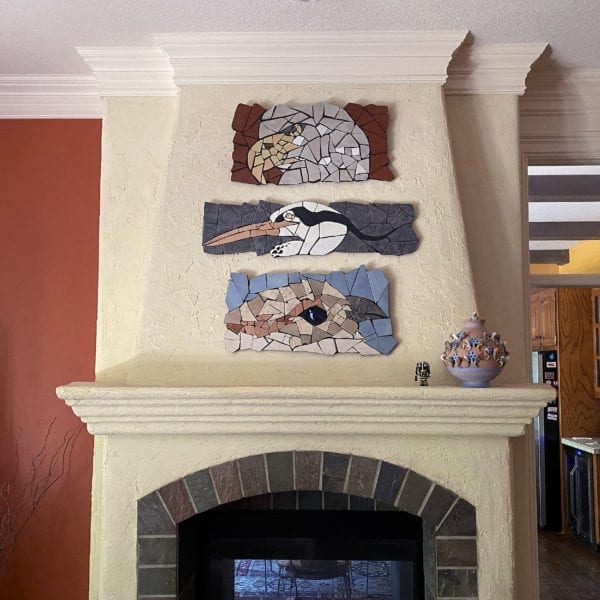 On the wall opposite of “Nexus,” above the fireplace, are three pieces by a local guy named Jeff Alexander. Over 20 years ago, I purchased the top and bottom ones from a cafe that was showing local art. Then I commissioned the middle one, “Gray Heron.” 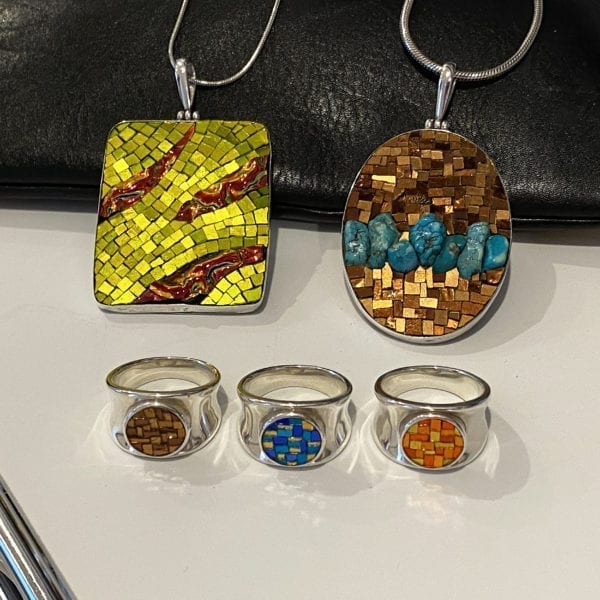 Finally, I have a few of Margo Anton’s jewelry pieces. I bought the pendants from her at the SAMA vendor market one year, and I commissioned her to make the three rings, though not all at the same time. Once she made the first one for me, I could not help myself but to get another. Then a third. What’s a girl to do!