Libby Hintz writes:  I thought I had only one or two mosaics to share but once I started looking around, I realized I had more! 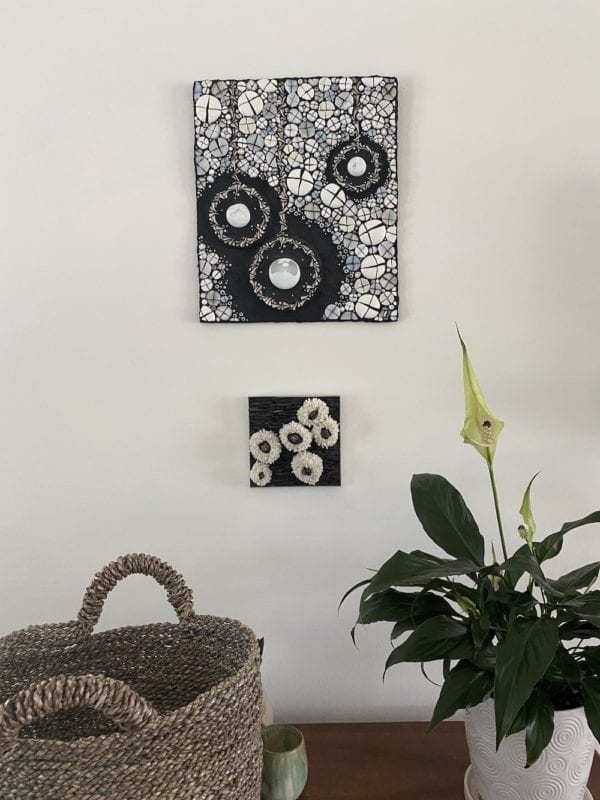 In the image below, the top mosaic by Kelley Knickerbocker was purchased after missing out on a Mosaic Art Salon silent auction one year – Kelley graciously made me a special mosaic.  I love how it changes based upon the light in the room.  The mosaic on the bottom is by Jane Chaskey that I purchased from the 2019 100 Moments in Mosaic online exhibition.  Jane and I became friends after meeting while eating lunch at the Northeast table at a conference six? years ago,  I’m really happy to be able to see her mosaic every day.  And, I really like how Jane’s mosaic hangs out with Kelley’s. 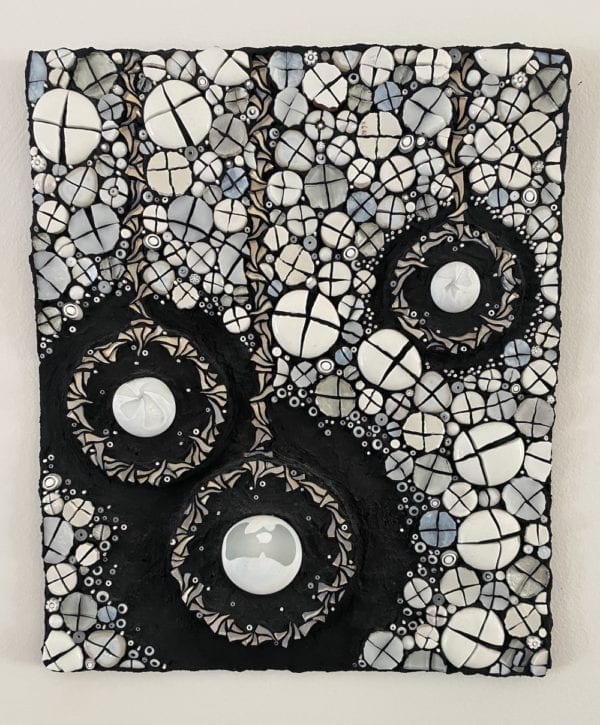 Close up of “White Study III” by Kelley Knickerbocker 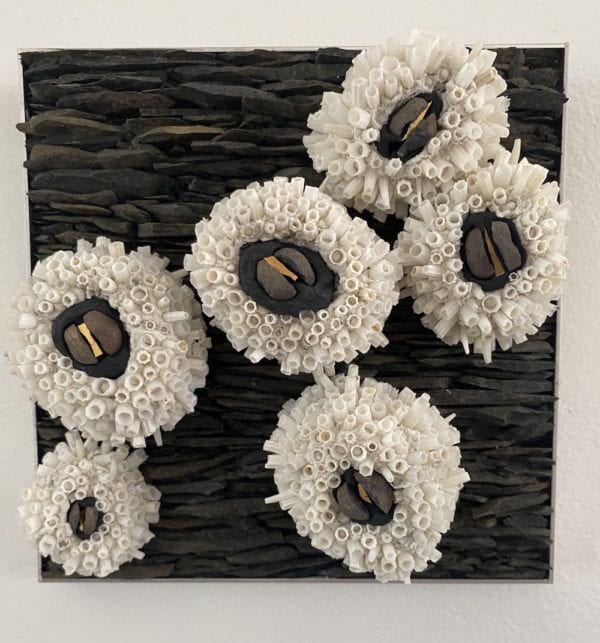 Close up of “The Surprise Inside” by Jane Chaskey

And while you can’t tell from this picture, this mosaic by Erin Pankratz hangs on the wall with a door in between next to Kelley’s mosaic.  I get to look at this every morning and it just makes me happy, I never tire of looking at it.  Purchased at a Mosaic Art Salon auction. 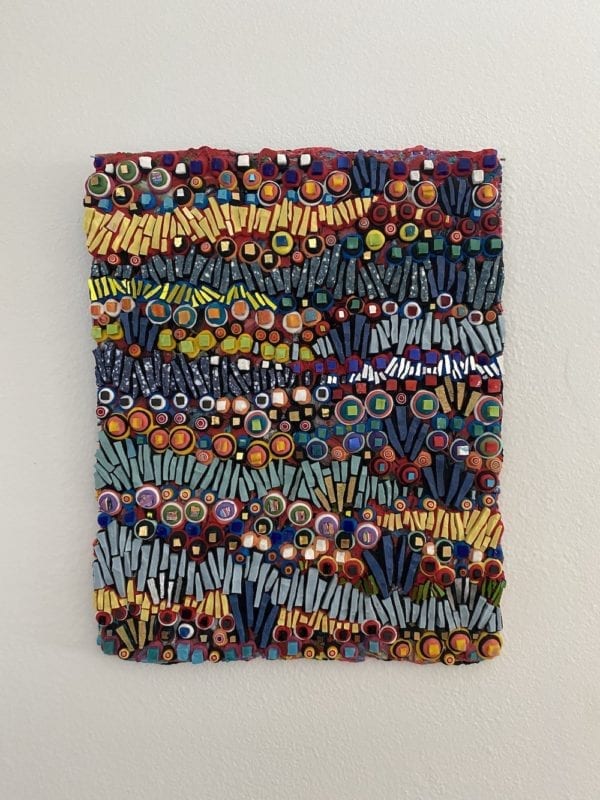 I kinda got into an egg making frenzy last year so one of my eggs is on the mantel.  I’m really into blue these days. 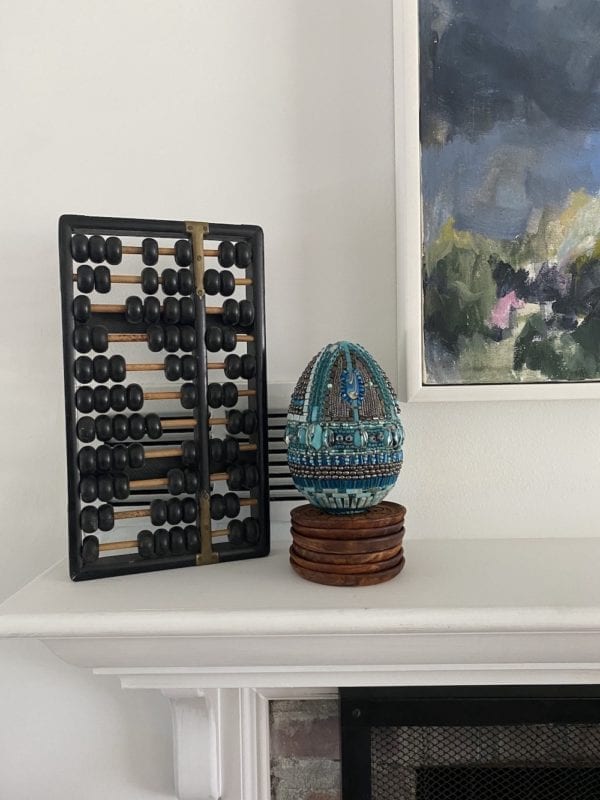 In my studio near all the beads I’ve collected, I keep this sweet little mosaic made through a Facebook giveaway in 2012, “Hintzville” by Jacqueline Iskander on the left and on the right “Door” by Luis Alberto Rivera, purchased at the Mosaic Art Salon in Nashville 2019. 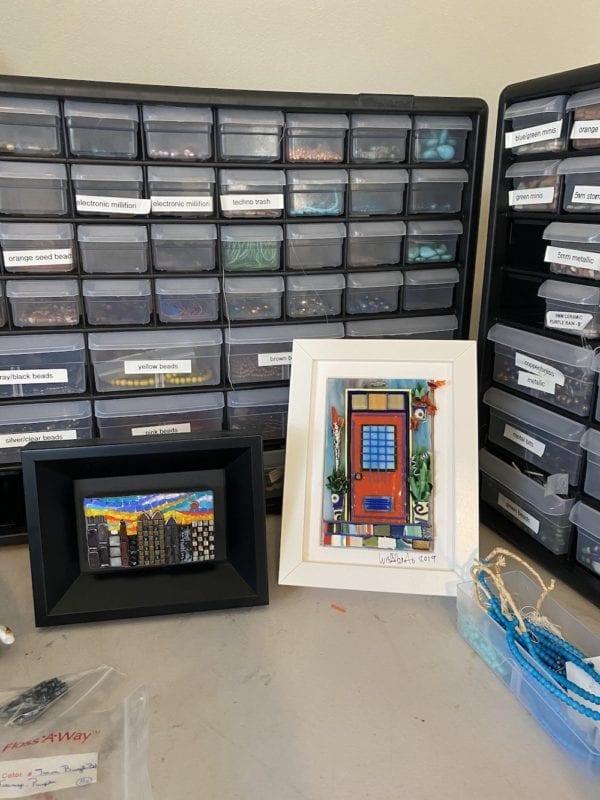 This mosaic by Suzan Germond was another purchase at the Mosaic Art Salon in Kentucky. Suzan was the very first person I ever met at my very first conference in Chicago 2009.  She was sitting in the lobby area where I had just sat down to try and meet people.  She was asking if anyone knew of anyone who needed a roommate and as I had come to the conference by myself I said I didn’t have a roommate, would she like to room with me? We became friends and I even went to her studio one year to help her with a big mosaic of a tiger she was working on for a commission.  I am really happy I own this as I am reminded of Suzan every time I see it. 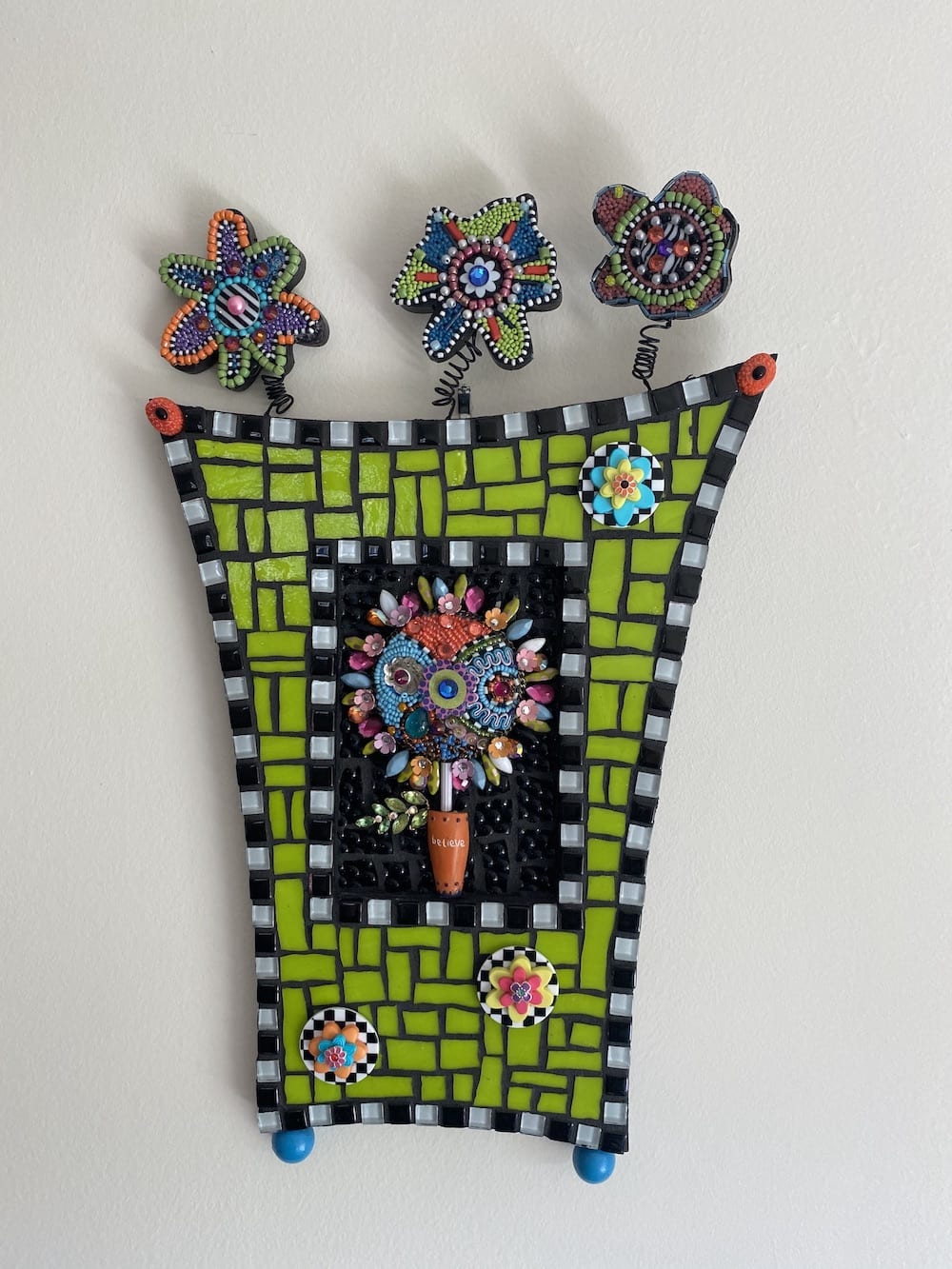 I was lucky enough to live on the Great South Bay on Long Island for four years and was able to see the most amazing sunsets most nights.  Upon walking out the front door that faced west, there was a tall wall and the peak of the house next door could be seen above it.  I remember the first time I opened the door upon the scene of the first mosaic, the sun had set but you could still see dark blue and Venus was prominently displayed.  The second mosaic was of a beautiful day with amazing white clouds and lots of peach in the sky. The third mosaic was of a night view with the lights on in the house.  The person who lived there wasn’t there very often so I was surprised to see the light in the window on and felt drawn to recreating it in mosaic. 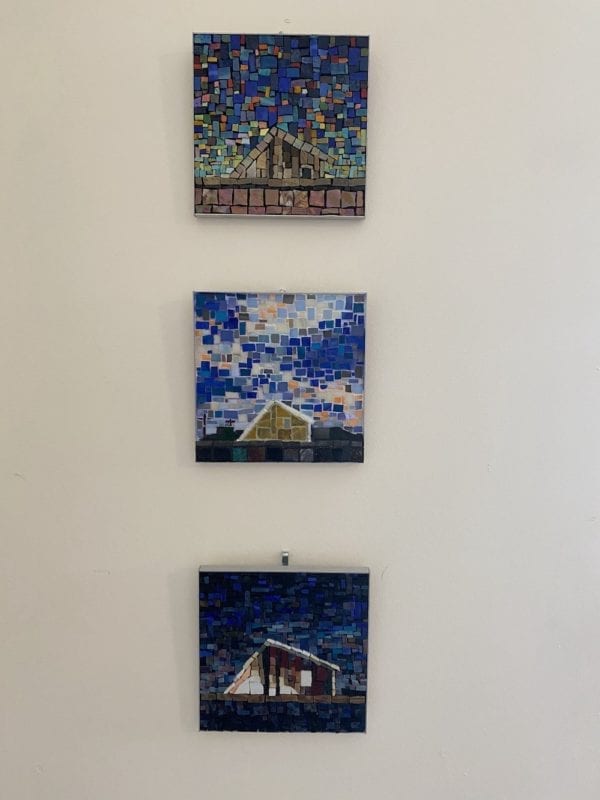 “Out My Front Door” series by Libby Hintz

Taking pictures of all the mosaics in the house sure has given me the itch to collect more!